Book Review
Summer with the Enemy 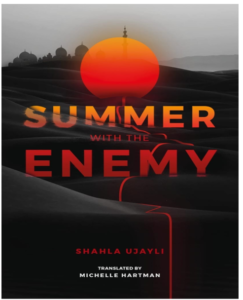 Summer with the Enemy is a novel written in the Arabic language by the Syrian writer Shahla Ujaili and translated to English by Michelle Hartman.  It follows the life stories and complex relations of three women Lamees, her mother Najwa, and her grandmother Karma. It describes the evolution of societies and political milieu in Syria from the 1920s till the Syrian civil war around the 2010s.   The novel starts in the present time, when Lamees, a young Syrian woman, having fled the ISIS siege on her hometown Raqqa, seeks asylum in Germany, Cologne, and reunites with Abboud, her childhood sweetheart. In a series of flashbacks, Lamees, the narrator, recollects episodes from her life in Syria, giving a vivid, nuanced description of the Syrian culture in Raqqa before and during the war. The value of this novel stems from its honest depiction of women’s lives within various class systems, marital relations, changing historical and political circumstances, and their adaptability to change within and outside their homeland.

Lamees, her mother Najwa, and grandmother Karma are a fine delineation of three successive generations of women. Karma comes of Armenian descent, worked as a dancer in the troupe of the famous Badia Masabni in Lebanon, and got married to Lamees’s grandfather, who afforded her an elegant lifestyle. Despite her prestigious status in the town and more liberal frame of mind than her surroundings, she would still prefer to hide her past as a dancer. Najwa, who works at the city’s public library, is ashamed of her mother’s past and trapped by the conservatism of a judgmental society. She is estranged from her husband, who has spent his marital years pursuing other women. Although she takes good care to raise her daughter and boost her self-esteem, Lamees cannot help feeling neglected. The absence of a father figure makes Lamees exceedingly  demanding of her mother’s attention and more insecure of losing her to a potential partner., Lamees reports feeling excessively lonely while growing up, hence her continuous pursuit of local weddings in rural areas around her town. Meeting Nicholas, a German astrological scientist, on his research trip to Raqqa, Najwa helps him with his research and entertains romantic feelings. The demure romance between Najwa and Nicholas conjures up Lamees’s worst insecurities about abandonment, and she declares him her enemy. Deeply resenting her mother’s preoccupation with Nicholas, she spends the summertime visiting a nearby horse ranch, learning horseback riding, and developing resilience and flexibility. The horses teach her wisdom: “When to go forward, when to stop, when to loosen the halter, when to pull it tight, and when to give up” (p.103). Remembering her childhood, Lamees describes her close innocent friendship with Abboud, the son of  Sahed, a Syrian veterinarian, and Anna, a Czechoslovakian wife. Upon the departure of Anna, Abboud becomes inseparable from Lamees and her family. In an innocent childish play, Abboud disguises by wearing women’s stockings over his head and pokes his head into Karma’s window. The next day Karma is found dead with a heart attack, and Lamees lives silently with a guilty feeling that her friend’s play killed her grandmother. She blocks Abboud and will not communicate with him again until after she immigrates to Germany when she is relieved from her guilt, learning that Karma was not in the room to see Abboud’s disguised face and that she died of a natural cause. Lamees’s family has long silently suffered the bullying of the Syrian government because of their feudal past. After the revolution against the government starts and Raqqa is seized by ISIS, Lamees and her mother suffer further because they are women. After a prolonged period of imposed curfew and deprivation of bare necessities, they take the perilous decision to evacuate with the remaining city inhabitants during the night on foot through a path to the river shore full of land mines. Najwa’s body blows up, and Lamees has to stay behind alone in peril to bury the remains of her mother’s body with the legs missing. As much as Lamees antagonized Nicholas during the summer when he was getting closer to Najwa,  she heartily accepts his guidance with her future studies and career in Germany. She will walk toward her German savior, her former enemy wearing her mother’s pearls and over her mother’s amputated legs (p.282).

In the Background of Lamees’ s personal drama, the recent history of a nation and an ever-evolving culture are brilliantly delineated. Lamees’s childhood memories depict the oppression practiced by the government as her uncle Najeeb was detained and killed without trial because of his dissension against the Al-Baath Party. The family members hushed his death in prison under torture as no manifestation of grief was allowed to them. The memories also include her school friends, daughters of political prisoners who were unjustly trained to praise the Al-Baath party at school and home in order for the kids to live in peace away from feelings of grudges and vengeance. “How could she not speak to any of us about the pain caused by his absence, and to not broadcast her longing for her father?” (151). As Lamees relegates such practices to the background of the events, she describes the silence that engulfs the injustices practiced widely by the government. “Those who oppress us, and take our fathers from us, are no doubt our enemies” (151). As the Syrian revolution against the government breaks out, there are multiple references to civilians participating actively in the strife. Families are divided deeply in their political affiliations. The horse trainer, Abu Layla, is accused by his three sons of serving power while they are active protestors. Two of them eventually seek asylum in Europe while the youngest dies under torture in a government jail. The father’s connection to the military elite cannot save him. Some poverty-stricken civilians in Raqqa join ISIS- as it ceases the town- and enjoy enforcing strict rules over Lamees and Najwa, especially since they are single women living without a male guardian. The details about the austerity and inhumanity of ISIS members, the curfews, the destruction, and the fighting cast light on the discrepancy between ISIS fanatic extremists  and the laid-back mild traditional civil society described in the novel prior to the advent of ISIS.

In a beautiful poetic language, the narrator describes her belonging to her homeland, the Euphrates river, which is the reason for existence and destruction at the same time (p. 153). The feeling of belonging to the place and the story of evacuation, landmines, her mother’s severed legs,  the city’s destruction, the journey of uprooting, the resettling, and the resilience that comes with hardship are widely shared by millions of displaced people in Syria. This novel speaks for them, empathizes with them, empowers them, and gives them a voice.