Difficulty in Poetry: A Stylistic Model 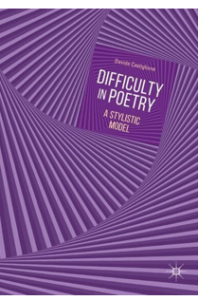 As its title suggests, Difficulty in Poetry: A Stylistic Model tackles poetic difficulty. The question here is, why would one consider a poem difficult? Is it a semantic issue, facing unfamiliar meanings of words? Alternatively, it can be a pragmatic issue, the unfamiliar context to readers. Or is it a cultural issue? Or can it be a combination of all the factors mentioned above? The author endeavors to define difficulty based on previous relevant work that dealt with the same vein. In previous work, Castiglione (2017) defined difficulty “as a text-driven response phenomenon associated with resistance to reading fluency”(p.99). In general, this book in review addresses difficulty in poetry with the aim of finding understanding and analyzing difficulty. Readers need to know what poetic difficulty means and why some poems are considered complex and difficult to understand. Castiglione (2018) used an interesting metaphor to make the idea of his book more reachable to the readers. He describes difficulty as a metropolis. The ways of understanding it are described as vehicles. Issues might be faced during the journey to the center of this city. Moreover, the author advertently shows how difficulty is different from ambiguity and obscurity. This book achieves the following main goals: (1) it presents a definition of difficulty in poetry (2) it aims at approaching difficulty in poetry.

Poetry is not a straightforward genre to study, read or to teach. Verdonk (2013) believes that poetic texts are complex in nature. Similarly, Jeffries (2008) noted that poems have their own texts worlds; thus, it is tricky and difficult for readers to comprehend.

Generally, the book consists of nine chapters. The first chapters present a historical overview of difficulty as a concept and review some scholarly traditions and discuss themes like elitism, obscurity, abstraction, and intentionality. There were three motives to approach poetic difficulty, which are reviewed in chapter two. These include typological, stylistic and reception-oriented traditions. The first is concerned with, while the stylistics focuses mainly on the linguistics elements. The latter, is much concerned with the readers’ experience.

In chapter three, the author presents a list of frameworks that best define and describe poetic difficulty; each one is specially designed to tackle a specific issue of difficulty. These include:

To illustrate the above points, a) difficulty is conceived as a measurable phenomenon. This idea potentially should be based on linguistic evidence that readers can replicate. It is empirical that depend on readers’- responses through questionnaires and tasks. b) This phenomenon can be tested and detected through elective approaches. It is a functional-based approach rather than a formalist one. c) The process of reading requires two basic cognitive processes: decoding and parsing. Reading difficult poems hinders making inferences. (d) Reading literature, particularly poetry, necessitates reasoning between generic language processing and gender-specific expectations, both of which are necessary for literary competency.  (e) Highlights the importance of literary pragmatics (context) in bridging stylistics and readers-response. To put it differently, to ensure a straightforward cognitive process, people tend to relate what they read to their own experiences and life. Here relevance theory is useful in this respect which is a linkage between pragmatic and cognitive linguistics.

The book consists of two main parts. The first part is a theoretical one. It presents the main concept and basic definitions as well as the framework. The second part exhibits the actual analysis of poetic difficulty and the primary corpus used for this purpose. The author collected corpus data of twelve poems from eleven different poets ( see screenshot 1 of the data). This limited number of poetic texts has been selected for the sake of qualitative analysis that usually takes a great effort. The selection of the corpus was not arbitrary. The poems show different styles; thus, this small data can be representative. Then this data is further divided into five poems to be analyzed extensively and to be part of reader-response data. The other seven poems are selected to show where difficulty exactly lies. The selected poems are Stevens’, Pound’s ( modernist wave), Hill’s, Howe’s( post-modernist wave) and Strand’s.

Chapter 4 is the heart of the book because it describes the model of the analysis. Furthermore, it presents the agents of readerly indicators and linguistic indicators of difficulty.

Chapter 5 presents the data and describes two case studies. The first one, ten undergraduate native speakers of English are involved. They were given a booklet of the five poems to read in a room then a questionnaire of several questions is distributed that can reflect the participants’ experience while reading the poems. The second case study was conducted with the aid of E-prime software which can count the time spent of reading. Twelve first-year undergraduate students are required to answer the same questionnaire.

The rest chapters (6, 7, 8) are the analytical ones. The actual illustration of the model around the concept difficulty is demonstrated in these chapters. The last chapter 9 gives the overall conclusions and suggestions for future studies.

As a reader, I value the author’s effort to integrate many crucial frameworks such as contextual, linguistic, and cognitive levels to deal with poetic difficulty. Such powerful combination provides readers with rigorous analysis and reasoning.

In conclusion, the book under review is recommended for those interested in the language of poetry, stylisticians, linguists, or scholars who aim to solve the puzzle of difficulty in some poetic texts. It is said that understanding the problem is half of the solution. Thus, this book provides ways to grasp and tackle poetic difficulty in a linguistic, stylistic manner. This work gives new perspectives and methods not only to stylistics, literary studies, cognitive poetics, but also to psychology academics.